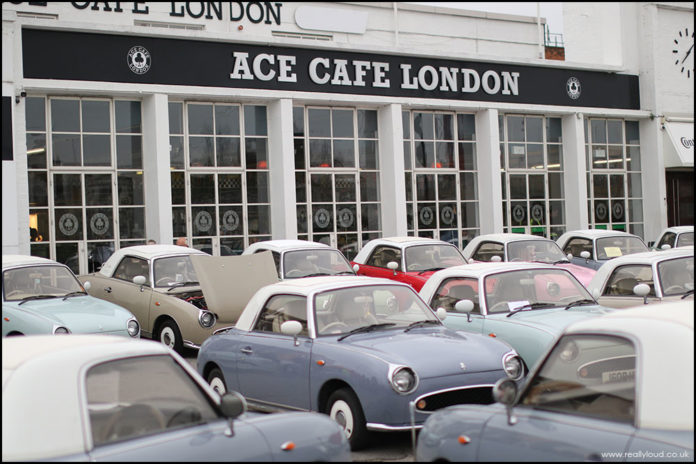 Brightly coloured, attention to detail and open minded. If you could judge a car by its owner then perhaps Nissan’s Figaro symbolises that opening description. It’s no surprise that the Nissan Figaro club attracts a wide demographic of owners from all walks of life. This is clearly by design rather by accident, particularly when you delve deeper into the concept and marketing Nissan carried out on the development of the car.

The Figaro is part of a four-car line up displayed at the 1987 Tokyo Motor Show. The public reaction was favourable, so a division known as the Pike Factory was set up by Nissan and during a period of retro-inspired creativity, pencilled in all four cars for production. The first car, the BE-1 was launched in 1987, followed by the 2CV inspired S-Cargo, with the utilitarian Pao arriving soon afterwards. However, it’s the Figaro that became the best-loved Pike car. 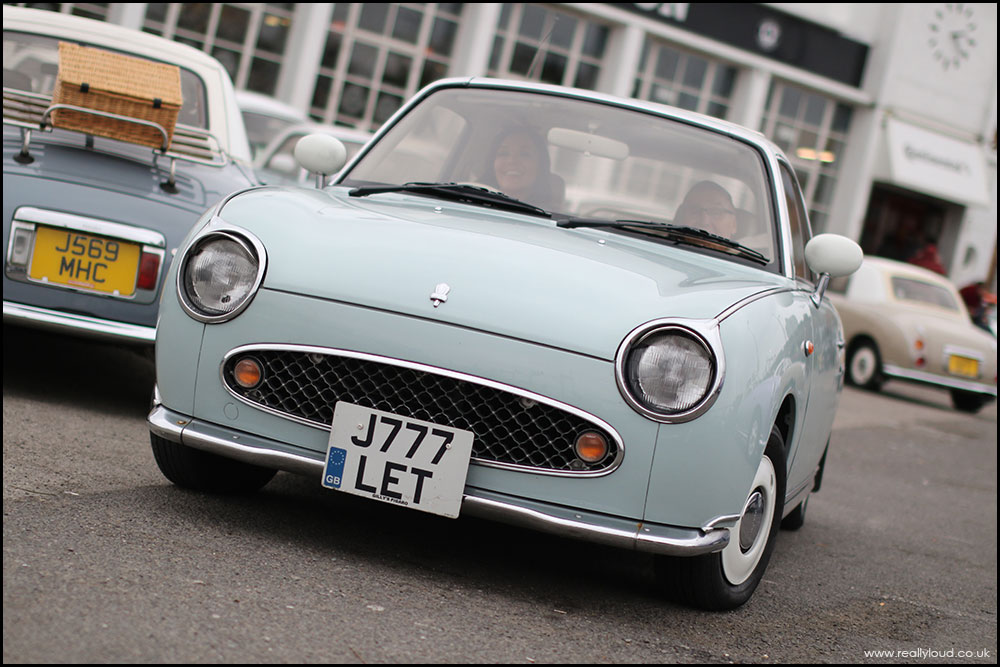 All were the brainchild of a Nissan designer, Naoki Sakai, who devised this series of uniquely styled cars. Initially, 8,000 Figaros were produced in 1991, with a further 12,000 produced in the same year to satisfy the demand. The stylistic 50’s Americana inspired Figaro is a fixed profile convertible car, issued in four pastels hues all rather reminiscent of a 50’s Ford Thunderbird catalogue. The liberal use of chrome throughout the styling enhances that retro connection, which is carried out inside, with ivory leather seats and bakelite-style fittings. Specifications are uniform throughout the Figaro, all fitted with automatic transmission and powered by a turbocharged 987cc engine unique to the Figaro and March (K10 Micra) Turbo. 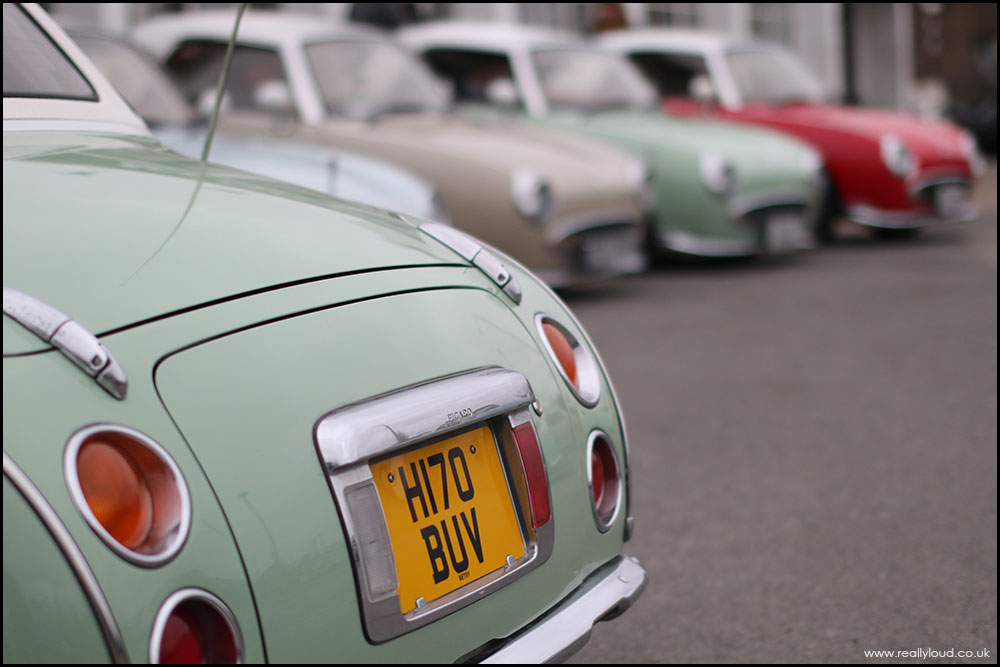 “The Figaro offers a certain Joie de vie, it’s the unpretentious character, personality and receptive owners help to win you over.” 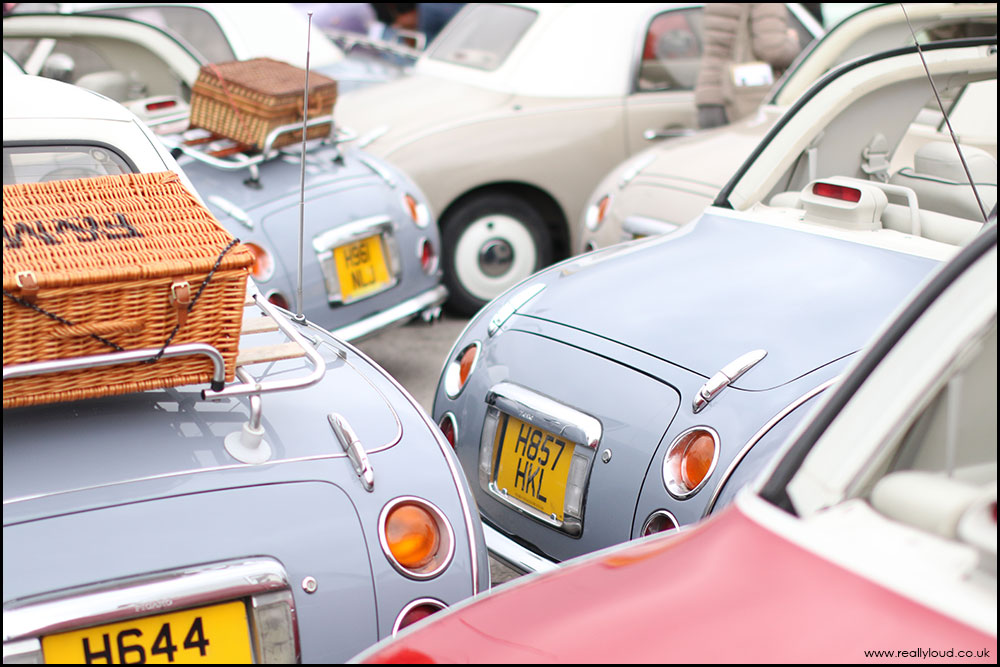 Figaro is based on the bulletproof mechanicals of the K10 Micra

Club organisers Kevin Fagan set the club up 10 years ago. He explains that some owners are not particularly mechanically minded, often choosing the Figaro just for its visual appeal. It’s just as well, as the Figaro is based on the bulletproof mechanicals of the K10 Micra. Owners also appreciate the hassle-free ownership – the Figaro is extremely easy to drive, the light clutch and smooth gearbox is a joy to manage. 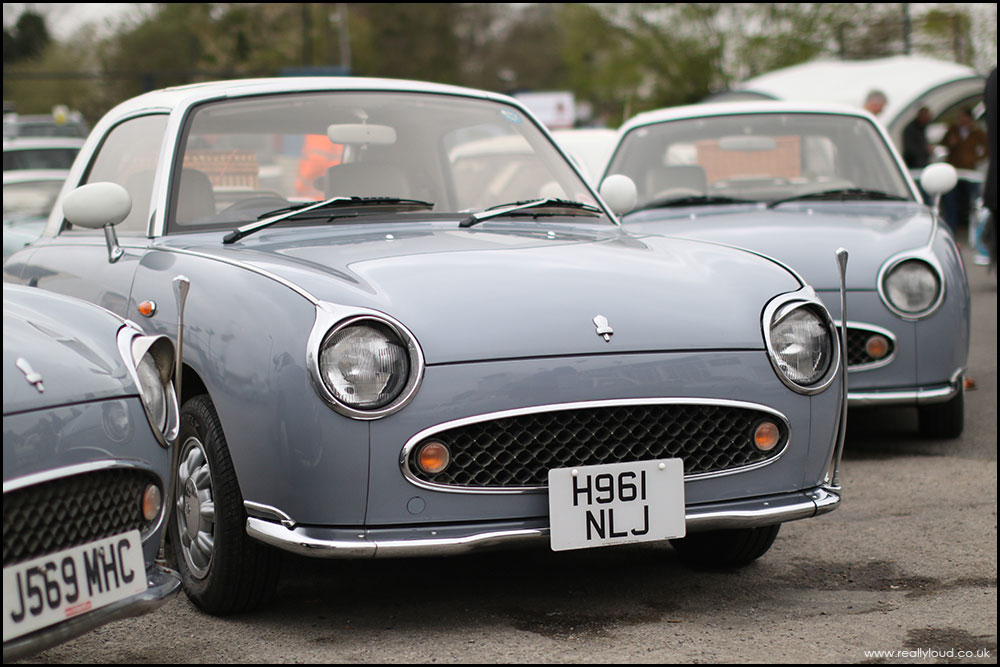 It clearly offers the comfort and usability of an 80’s car with the style and panache of a bygone era. As the Japanese import market opened up in the mid-’90s, an influx of privately imported late ’80s and early 90’s sports cars and vans came into the UK. It is believed that around 3,000 Figaros have discovered their way on to UK roads.. 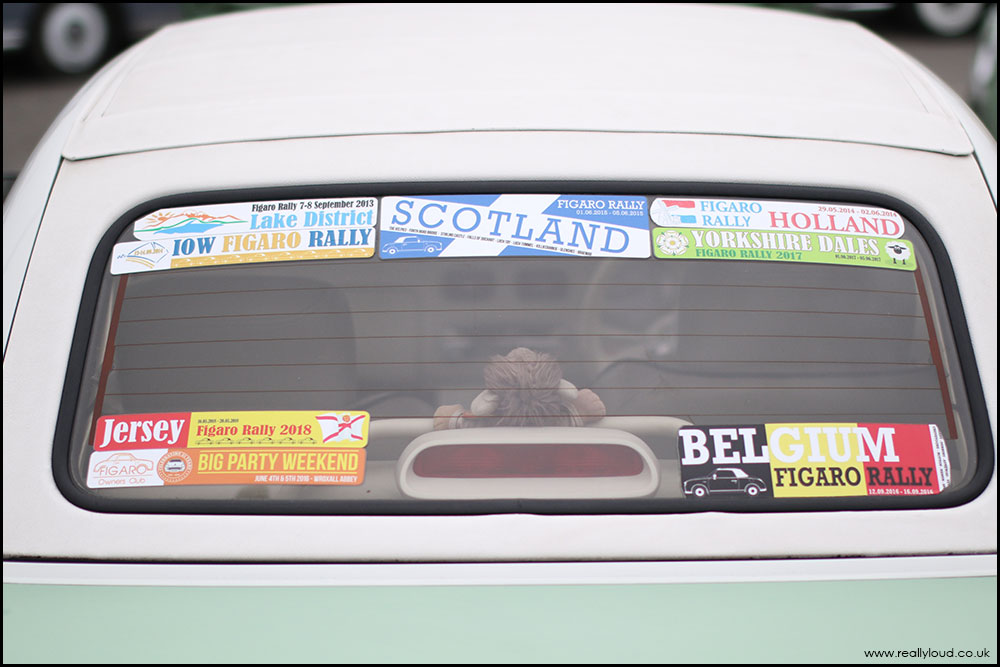 A well travelled car, Figaro’s despite being only sold in RHD, are popular all over Europe. 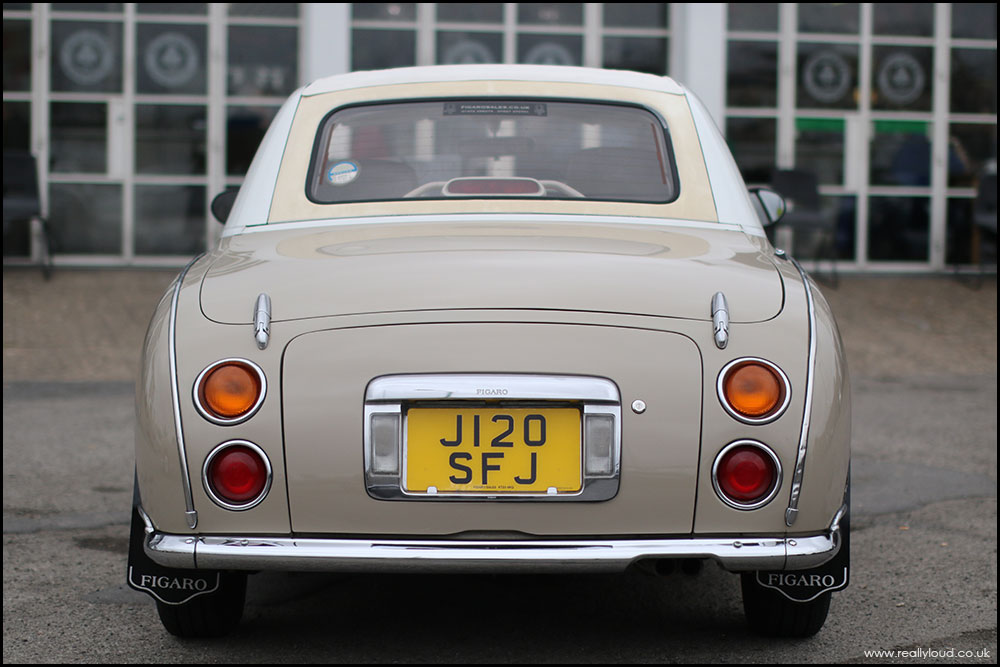 Topaz Mist is the rarest colour, just 2,000 were sold in this hue. 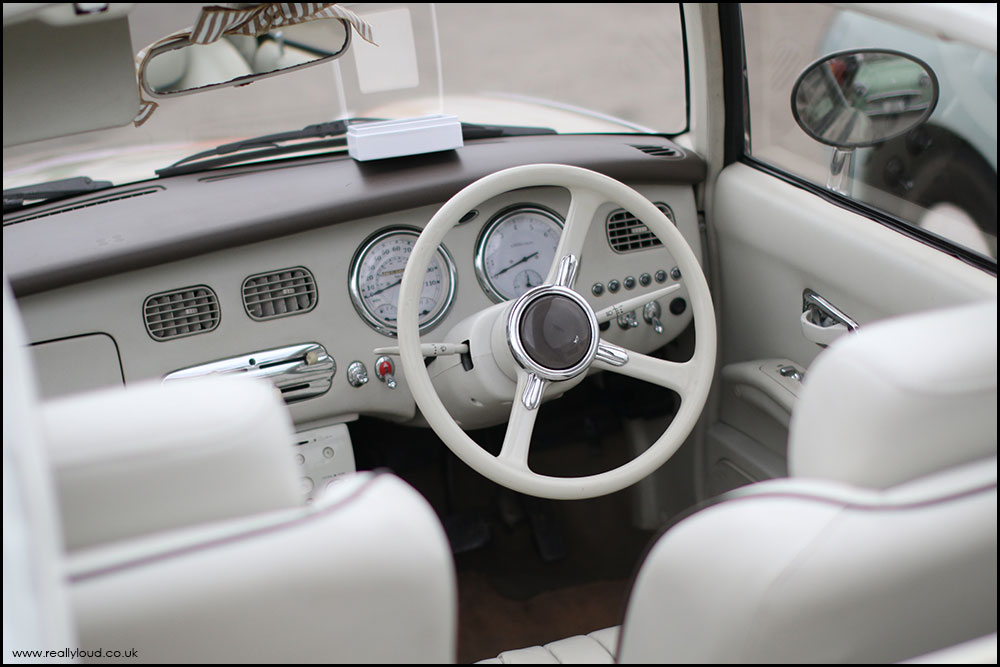 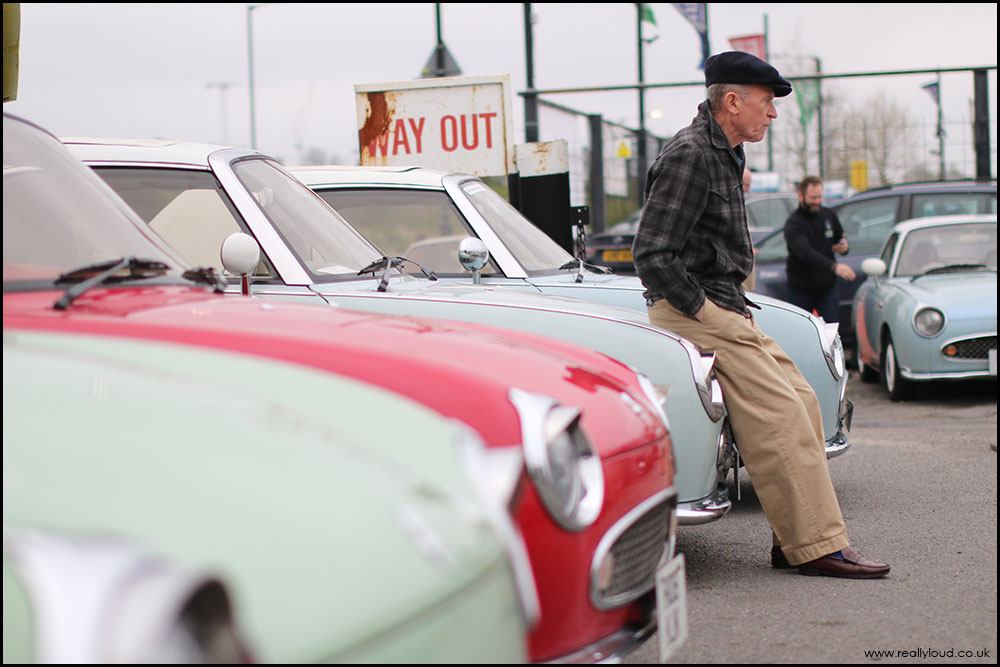 The ownership profile is not easy to pinpoint, the Figaro meets the criteria for people of all ages. 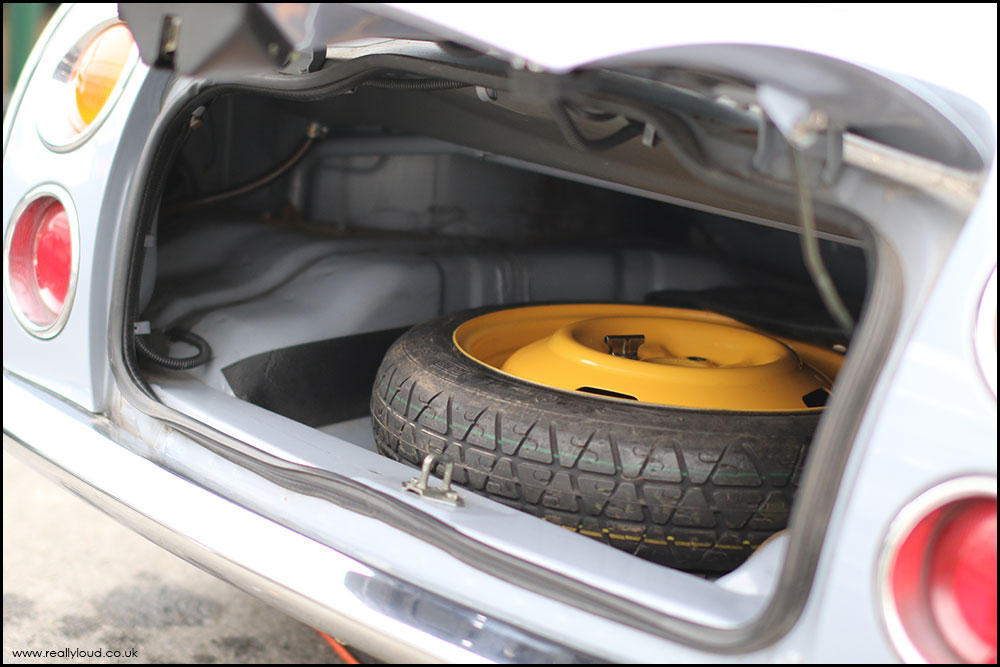 An early adopter of the space saving wheel, like all spacesavers, they’re strictly used for temporary use only. 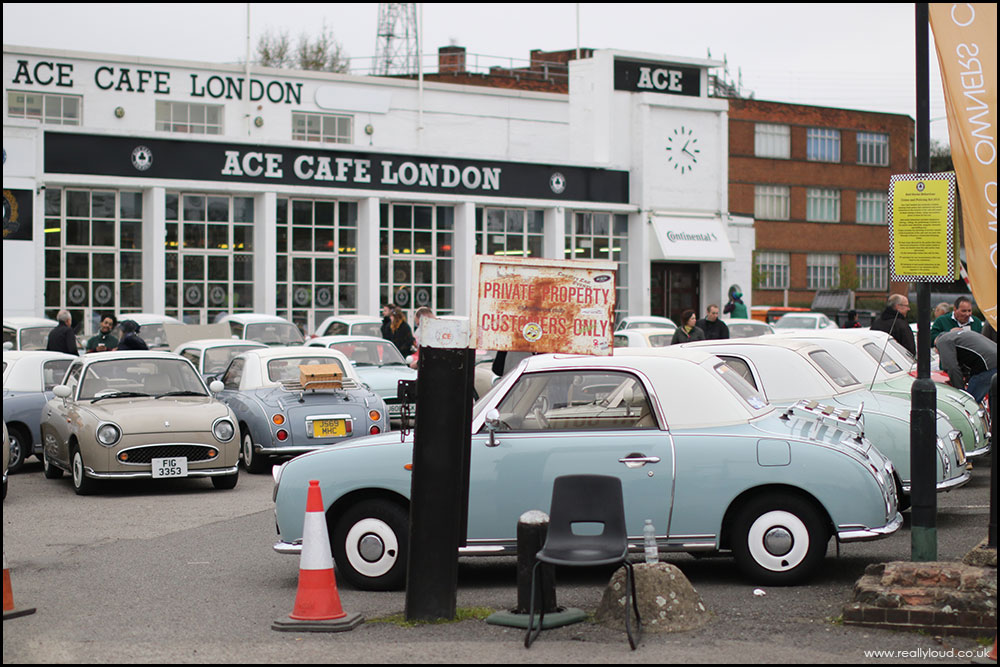 The venue is a regular meeting place for the Figaro owners club. 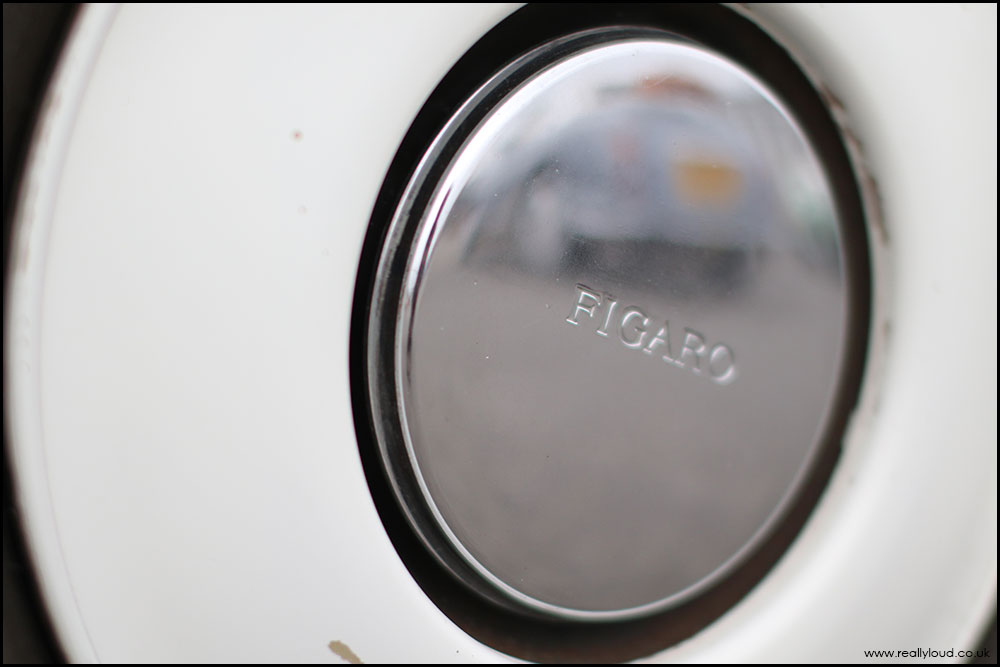 The retro details run deep throughout the car, the simple hubcaps are the prefect jewellery for the Figaro. 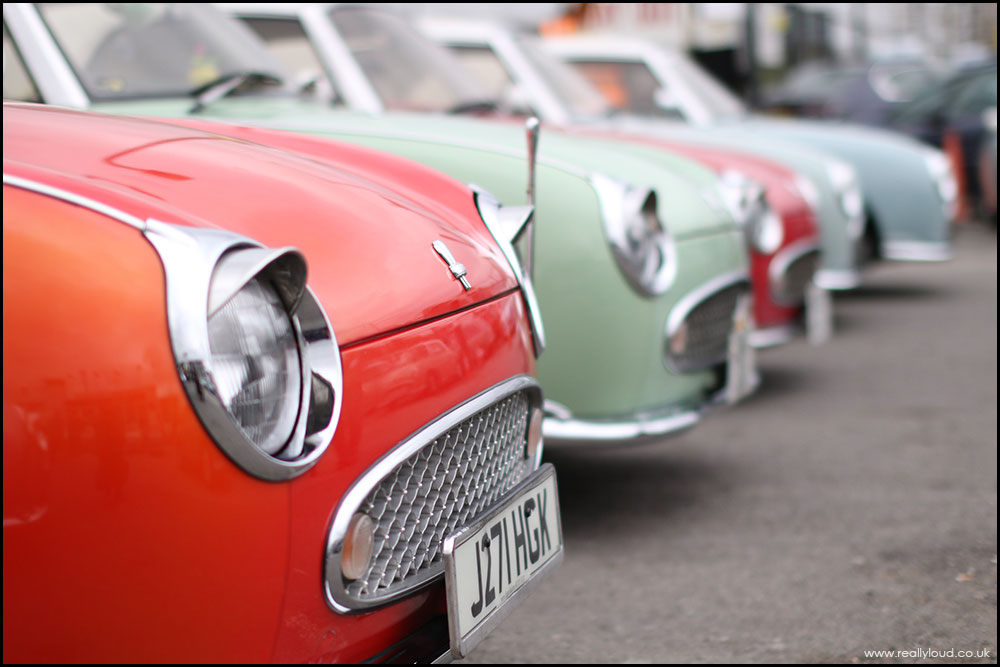 Red is not a standard colour, but suits the lines well. 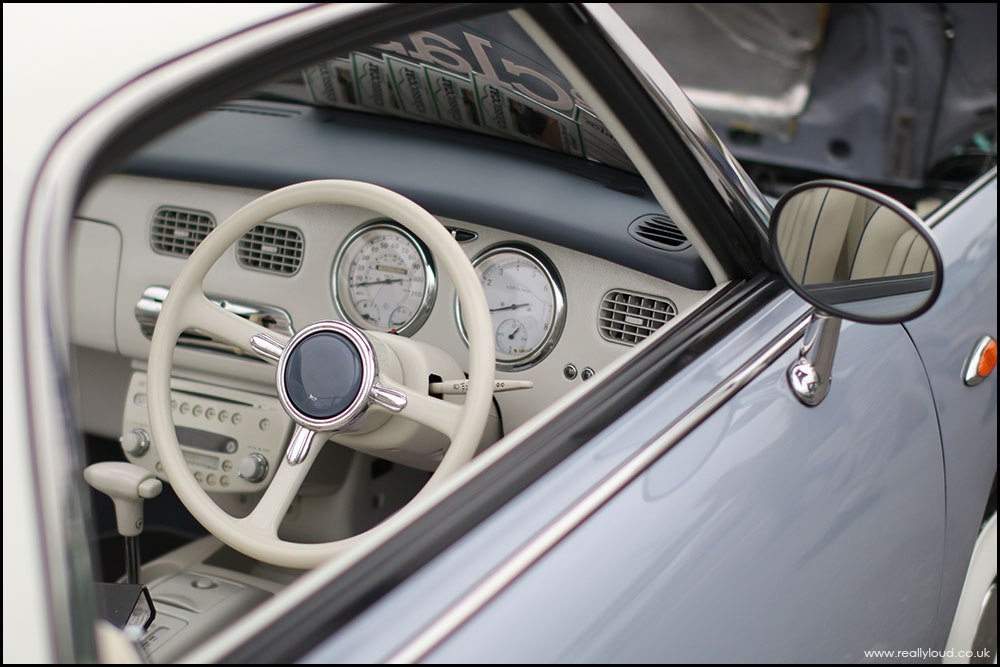 All were 3 speed Automatics mated to 1-litre Turbo Micra engines.

On the overcrowded UK roads you may attract the odd dismissive comment, but who cares when you’re having this much fun playing dress up!

Reallyloud joined the Figaro Owners Club at Londons famous Ace Cafe Club with a collection of 55 cars, some of which had travelled as far as Cornwall and Glasgow.

The owners club also cater for other Pike cars, is the best place to find more information and events, particularly if you’re looking to buy an example or parts. With any older Japanese cars, despite the reliability there are plenty of pitfalls – its easy to get swayed by the asthetics of the Figaros design. They oldest cars are over 30 years old, so there’s plenty of precautions and advice the club can offer. 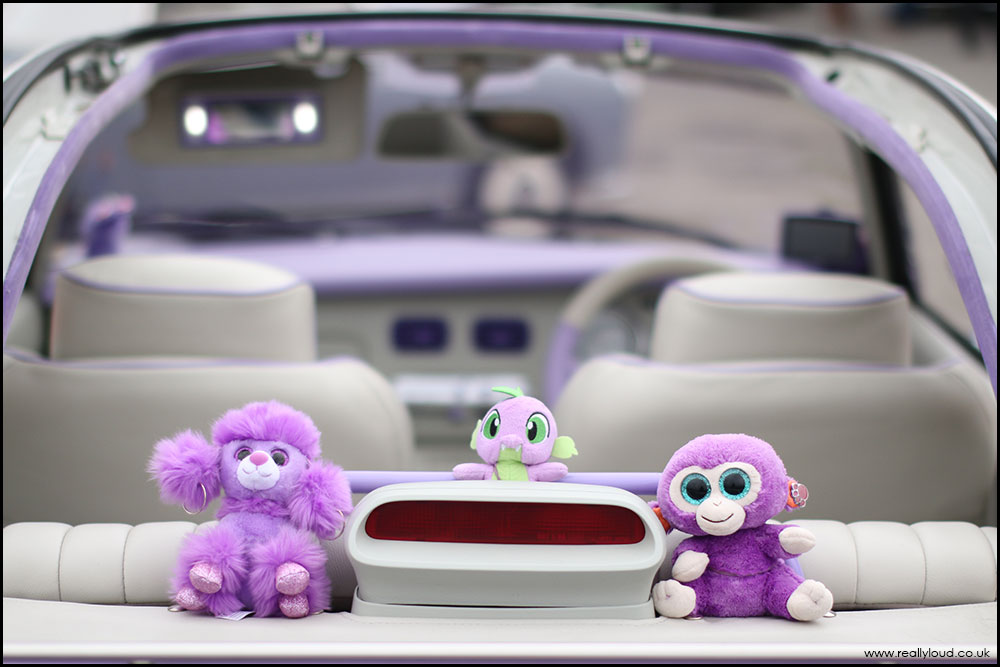 Personalisation is part of the appeal, it strikes a chord with the retro fanatic. 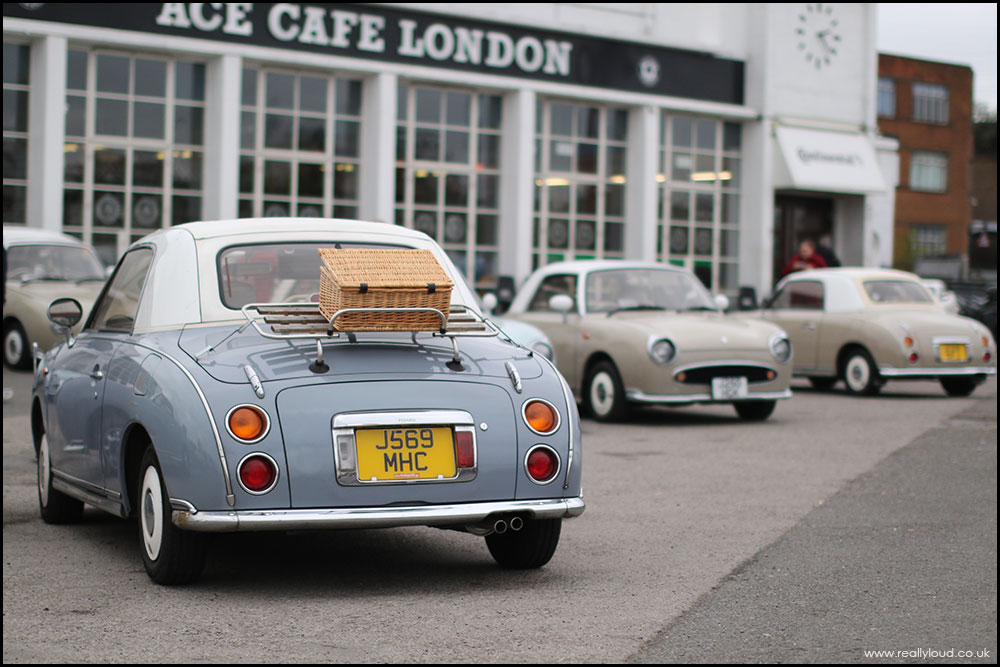 There were some bemused looks from the usual Ace Cafe biker clientele, but what is noticeable is how much goodwill these cars attract. 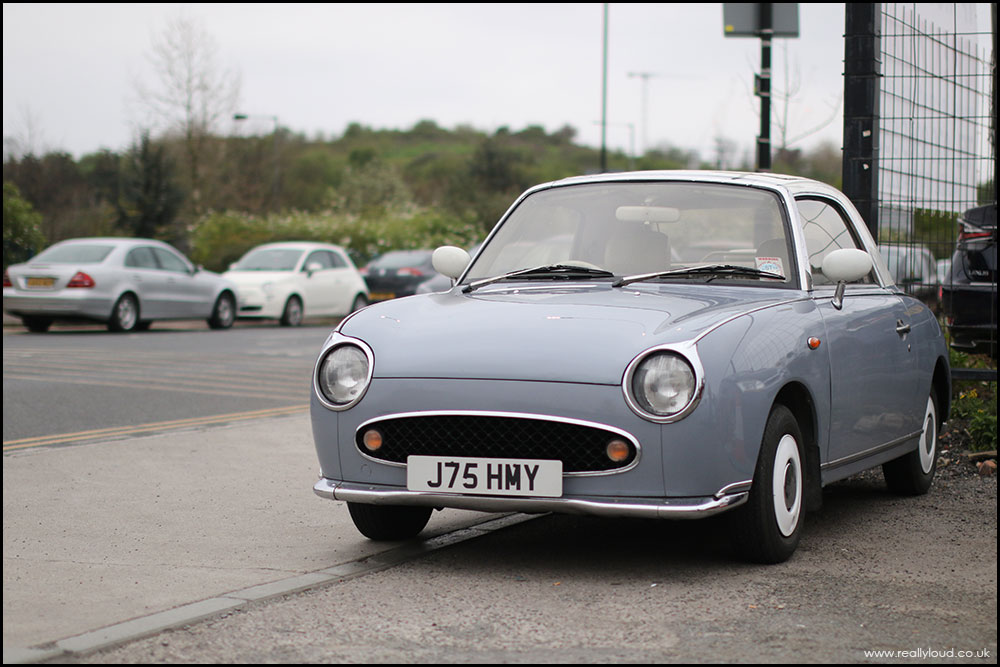 When new, Japanese customers had to gamble on a lottery to place an order. Despite the high asking price (roughly £10,000 in 1991 – as much as higher spec Pulsar) it was over subscribed. 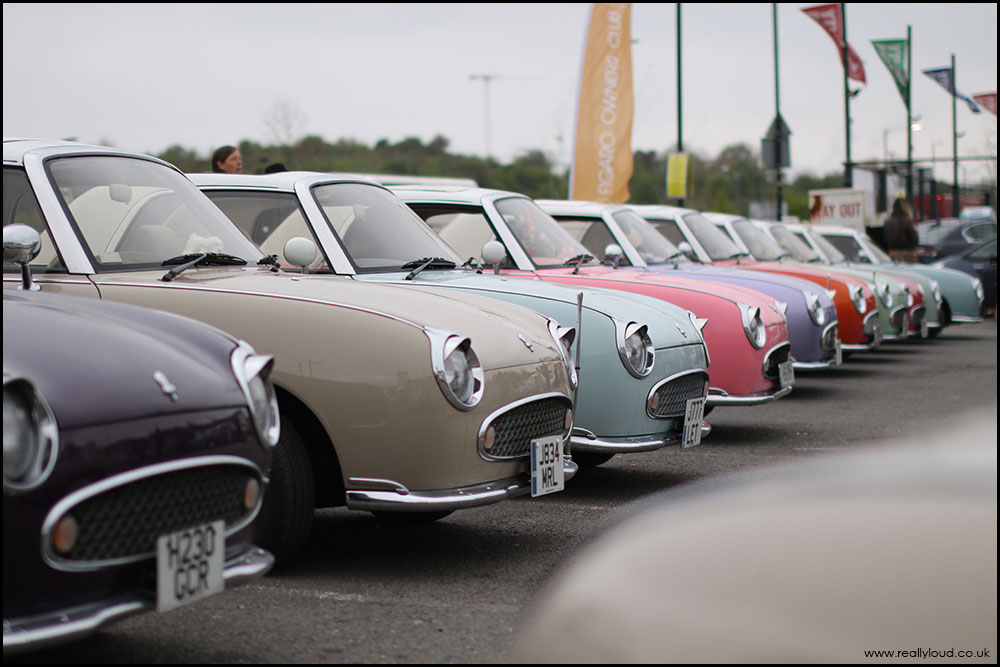 It came in four colors, representing the four seasons: Lapis Grey for winter, Emerald green for spring, Pale Aqua for summer, and Topaz Mist for autumn. 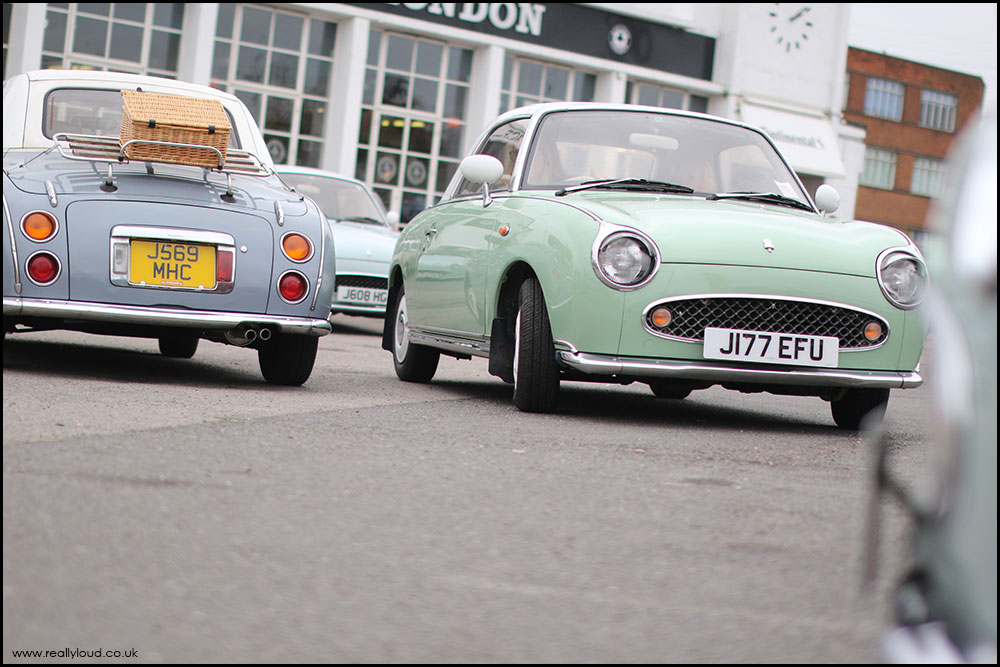 Designed by Naoki Sakai, he is notable for being a prominent product designer, as well as responsible for all the other previous Pike cars.