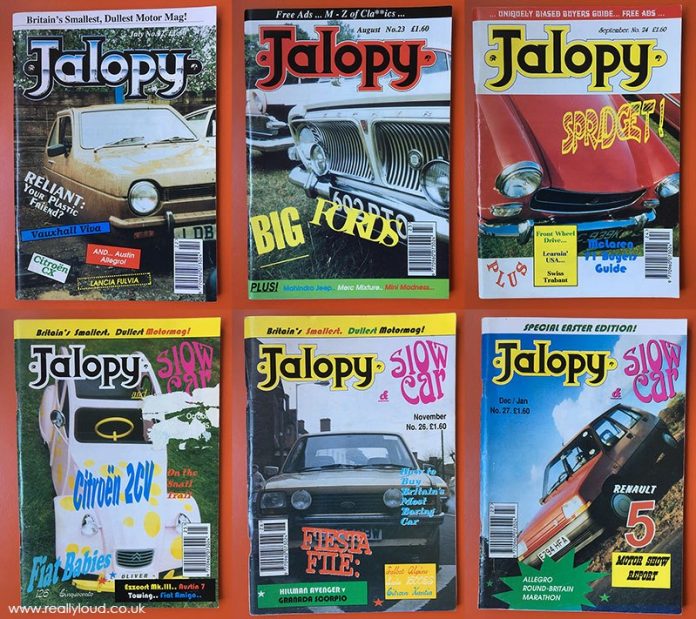 am tempted to start this article with the words ‘Before the internet…’ but that will paint a picture that things were better before the Internet. They clearly were not, otherwise you wouldn’t be here now, would you? So, back in 1992, a small but significant motoring publication hit the UK shelves and perhaps in the kind of same way when one discovers a little corner of the web, Jalopy Magazine touched a grassroots demographic that was not seen in print before. At the time, the classic car boom was in full effect, recording unprecedented prices, attracting investors which had unfortunately priced many people out of the market; particularly for those looked for open top sports cars. This led to a boom in the classic car industry, enabling everything from manufacturing old parts to specialist storage to memorabilia. So while a whole range of glossy magazines dedicated to classic car motoring emerged, the majority emphased on investment, technical, social and design aspects of the industry. Also, the types of cars featured – typically those long lost open top sports cars would regularly warrent a feature and review.

The UK has always been hotbed for cheap but useable cars. Conjuring up images of Arthur Daley types on hardstanding concrete selling clocked wrecks saved from the scrapyard, an often precarious but occasionally very rewarding market for cheap cars had maintained a healthy cottage industry. Depreciation is the buyers best friend, with rust coming in as a close second, but some creative use of P38 filler, or perhaps even some evidence of welding could easily render scrap fodder into this weeks special. This long tradition of side-street cars, is somewhat less evident today, with increased land prices and tougher consumer rights clamping down on such vocations. To the masochistic type or perhaps someone who just enjoys budget motoring today, its changed format somewhat. Instead of leafing on a thursday morning through a copy of Trader, todays customer will can buy a cheap car on their phone and insure, tax, collect and potentially sell it again in a day. it’s a lot easier to spot a dog, with the basic knowledge of a handful of web sites that will uncover missed finance, MOT records as well as multitude of knowledge and owner reviews.

So back to Jalopy, now the obvious has been stated of how things are better today. The magazine encompassed a small but dedicated type of follower, usually younger than the typical old car owner and attracted people looking for shabby unloved cheap bread and butter cars. There was still emphasis on the British material, but also featured cars that were filling up breakers yards at the time, such as unsung Renaults, Datsuns and Hillmans. Written in an amusing style not unlike the Viz comic, the deliberately low-fi A5 magazine, printed on paper only marginally thicker than toilet paper. This black and white corpiconia of articles, cartoons and amusingly captioned photos represented the very bottom end of the classic car magazine market.

Distribution initially was good, available in high street retailers, but as the years progressed it became harder to find. I was lucky enough to buy from No 4 onwards until my local retailer just stopped stocking it sometime around issue 20. Turns out that the small team who had lovingly put the magazine together simply couldn’t get a good enough distribution. It wasn’t until 10 years had passed and a lucky ebay strike resulted in me being able to fill in the gaps up to no 27. Typical contents would include an editorial, usually an observational rant about the legislations of scrapyards, modern engines or fending off accusation of being obsessed by Allegros, followed by readers comments and occasionally unhinged views. There would be a great reviews section called the ‘Banger guide’ as well as a classified section.

“Its main strength was its unique and compelling choice of articles, mostly sent in by long suffering contributors, with their personal experiences of rust, skinned knuckles and buying old cars for less than the price of a round of beer.”

The magazine itself had been the idea of 3 enthusiasts from Shropshire, who decided it was a good idea to launch a magazine chronicling the experiences and disasters of old unloved cars, but increasing costs and the distribution issues, as well as a gradual decline in sales meant that the hard work and passion of Jalopy finally fizzled out in 1995. The last editions had apparently grown to A4, but I’ve yet to come across any of those, possibly due to the fact so few were published.

or those wanting to buy magazines for glossy photography and a visual social documentation of cars of the period, then you’d be very disappointed. The image quality resembled a punk fanzine, but thats the whole point. The cover would entice you, boasting the motto ‘ Britians smallest, dullest Motormag’  with the same self deprecating nature through the magazine, but it was actually well written, factually well researched and offered the reader an almost direct rapport with the magazine. It was knowledgable in the way that only men can remember utterly useless information for no other reason other than bragging rights. How else would you know that the wheels from a mid 70’s Lotus Elite fit perfectly on many Japanese cars from the same era?

Printed on paper only marginally thicker than toilet paper

I’m so glad I have a habit of hoarding things, to be honest these magazines are so light and small they hardly take up any space, so  I’ve managed somehow to keep them. Those who know and have read them, will understand why they’ve become quite sought after amongst well fed oily fingered middle aged men. You still get online forum threads periodically asking the same question – ‘Does anyone remember those Jalopy magazines?’