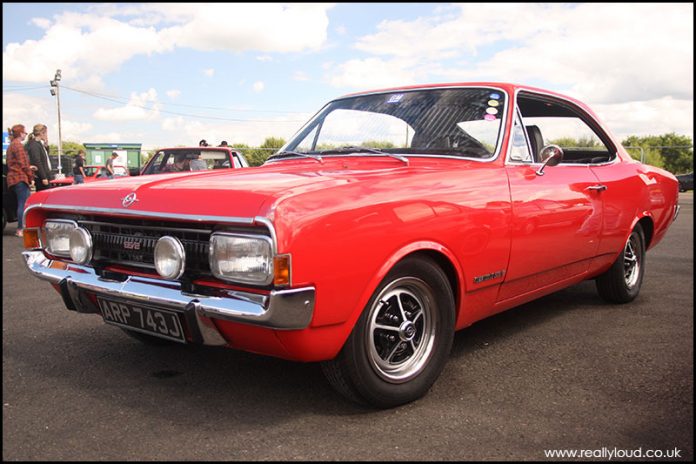 The Opel Commodore was announced in the UK at the 1967 Motor Show, with the dual-carburettor GS Coupe and Saloon being launched in the spring of the following year. At the time Opel had a tiny market share in the UK, having restarted imports in 1967 after a 28 year hiatus. The Kadett was the volume seller, with the Commodore contributing towards an average of 350 registration a year over it’s 4 year run. Based on the Rekord C as a six cylinder, it was marketed as an up-market car aimed at the executive car sector. It was to introduced to help push the brand into the luxury car market, that had been dominated by Mercedes at the time. Initially available with 2.2 or 2.5 litre Straight-six engines and available as a 2 or 4 door saloon or a 2 door hardtop coupe. General Motors had started to globalise the brand, and much of the development costs were shared across the world. The South American Chevrolet Opala shared platforms with the Opel, as well as other parts. The Australian Holden Monaro was visually very similar, and used the same styling cues.

Two versions of the Commodore coupe were sold, the GS which was a standard model and a LHD GS/E which was a special order model only.

The GS/E debuted in March 1970, powered by a Bosch D-jetronic fuel-injection 2490cc, which gave it a useful 35bhp increase of power over the GS model. The E stood for petrol injection (Einspritz) as it used the Bosch D-jetronic fuel injection system, as a result the Bosch first multi-point EFI system was expensive to develop and produce but was instrumental in the development of Fuel Injection in todays cars. The GS/E uses the smaller capacity 2.5 litre unit rather than the later Carburettor fed 2.8 litre but the fuel injection system made the car more powerful and faster, and at the time was the most powerful Opel in production. As a result the hike in power meant that the Opel was quicker than the base Porsche 911T.

The GS/E also carved out a career in motorsports, with cars being tuned by Steinmetz Opel Tuning. Opel had not been actively involved in Motorsports prior to the Commodore, but it’s reputation had been noted by an example outrunning Porsches in the hands of a then fledgling Niki Lauda. A bored out 3-litre Commodore struggled against the Capris and BMW’s which were dominating the Group 2 touring car events, but it gave the company presence in the sport and set the precidence for the next generation of Commodores.

The coupe’s chassis was specifically developed to reflect that it was to be a pillar less vehicle, it needed the specific sill redesign to maintain body shell rigidity and an inner strengthener required to counterbalance the lack of a B pillar. Other specific cues that differentiate the car from the GS were the wheels, as well as improved equipment and over riders.

Refined and comfortable, the Commodore was competing in the pretigious environment usually dominated by BMW and Mercedes, appealing to those company directors who appreciate a roomy 4 seater, with driving abailities and excellent road handling.

One of the best aspects of the Commodore was it’s Strasbourg automatic transmission, and reviewers at the time often commented as it being one of the best in the world.

The GS/E however was a slow seller, hindered by its Left hand drive format and it’s high retail price of £2126 in 1971 which placed in firmly in the E-type Jaguar market, as a consequence only 2,574 GS and GS/E variants were sold worldwide. Production ceased in 1972, when replaced by a newer design, the GS/E name continued into the Commodore B series and remained part of the line up until 1977.

Simon Downs from Milton Keynes bought the 1971 Cardinal Red car in 2006 and had literally saved it from the banger racing circuit. When he bought it it was found with one key and was originally fitted with a vinyl roof with pencil marks still on the roof. This car was assembled in Biel/Bienne in Switzerland as one of ‘GM Suisse Montage’ knock down kits, with panels being shipped over from Germany to overcome the taxation laws. The factory continued to use the factory to assemble GM cars well into the 70’s.

The body while complete and while mostly original it needed a lot of work, which was shared with Opel restorers Suffolk County Manta’s.

The car was stripped down completely. While the body was being taken care of, Simon set to powder coating the entire front subframe and components before reassembly. Suspension and bushes were renewed, as well as the time consuming job of sourcing a huge number of parts via the internet, auto jumbles and forums, everything from a pair of rear panels sourced from South America to locating UK specification headlamps to locating NOS rear quarter trim pieces.

The rear panel from Simons car was for a Chevrolet Opala – almost the same design, but without the rear vents. In hindsight a better alternative as they were rust traps. The car also uses a modern gearbox which is far easier to live with and improves fuel economy and also finished with a digital audio player, rather than relying on MW/LW radio.

The fuel injection system was the first commercially produced system for cars by BOSCH, and was shared with various cars such as the Jaguar XJ12 and Citroen SM. Simon needed to source new injectors, but luckily there was the knowledge and availability out there.

All microfiche files were recently destroyed with the demolishing of the factory but Simon managed to obtain proof of its date of manufacturer directly from GM Suisse SA. The DVLA needed to inspect that car prior to releasing an age related plate.

Simon himself said that the secret is not to rush with this scale of project. He’d had been tempted to cut some corners, but this wasn’t an option for a car this unique.

Part of the fun of restoring a car like this is discovering new old stock, in far flung parts of the world, and learning how the car was assembled.

Parts were not cheap, typically a front wing would cost 500 Euro’s. He’s been enjoying the car, after 4 years of restoration and picking up awards at almost every show he attends!

“Parts were not cheap, typically a front wing would cost 500 Euro’s.”

After some initial teething issues with the reliability after the restoration, Simon took the time and trouble to explore and resolve each issue – something that requires a great deal of patience as well as knowledge sharing. The sense of completing such an undertaking is a once in a lifetime achievement for Simon. He’s said that he’d enjoyed sourcing the bits required and with each delivery the excitement of opening new/replacement parts is intoxicating.

Compared to the home grown executive cars, one of the most notible things about continental manufacturers was their wider selection of body styles on the models, tapping into less profitable but niche opportunities in the market. As a large stylish halo car for Opel, the security of its GM parent company could justify the additional tooling costs, as well as it’s technological advances in fuel management. As the fuel crisis loomed, the next generation of Commodore lost some of the exclusivity and individuality, but ultimately was rewarded by far better sales.